Add to wishlistAdded to wishlistRemoved from wishlist 0
Add to compare
8.5
Expert ScoreRead review

Coming up next we have yet another Ameriwood product, and this one is not very different from the rest. It is smaller than what you would expect from an Ameriwood or any fireplace TV console, but that is what makes it appropriate for smaller places such as bedrooms or smaller living rooms.

There is a reasonable amount to talk about in regards to this product but there are few issues. If anything, most of if not all customers (a bit too bold of an assumption) are relatively pleased with this one. It is a less ambitious product which fulfills its modest ambitions well enough.

This fireplace TV stand is made of a laminated wood veneer, MDF and particleboard. It only comes in espresso, and it was not in stock when we were researching it. This could either mean that it is not too popular of a product and thus fewer are made, or that it is so popular that all of them have been bought. It could, of course, also mean that they simply ran out. We will leave that up to interpretation.

Another thing which can apparently be left up to interpretation are the dimensions. While it is reportedly not the 55” of length as advertised, but rather 47” long. This an odd incongruency and has not been investigated further, but know that one customer did submit this information.

It will accommodate most flat-panel TVs up to 50” long and with a maximum weight of up to 70 lbs. The shelving consists of two open shelves and two longer, glass panel doors which open up to two adjustable shelves. At this point, we do not need to tell you what they are for as you are probably already more than aware.

The fireplace insert features AltraFlame built-in reflectors which use a patented technology for a realistic flame effect. How realistic? Well, customers report that it is a gimmick more than anything else and that the flames are fairly standard for an electric fireplace. That said, the heat spreads rather efficiently, and there have been very few complaints about that. Speaking of heat, you can turn the flame on either by itself or with heat, which means that this fireplace can cozy up the atmosphere of a room during summer as well. It boasts 120 Volts, 1,400 Watts, and 4,600 BTU which gives it the ability to warm up a room of up to approximately 400 square feet.

So there you have it. This one is a bit of an oddball in the fireplace TV stand crowd, but it is a good one. If you need a piece of furniture which will give you a good place to put your TV and also make the atmosphere all nice and cozy, then you really need not look further. With an easy assembly process, this is a great pick for someone in the market for a more compact fireplace TV stand. 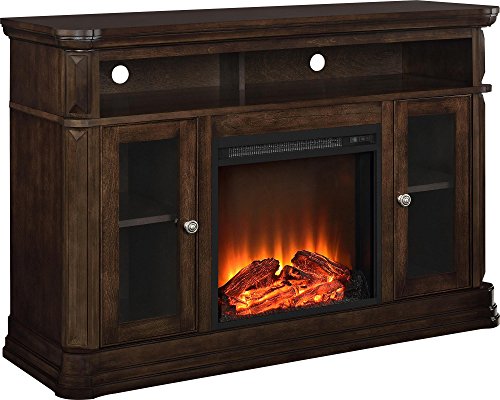 There are no reviews yet.

Be the first to review “Ameriwood Home Brooklyn Electric Fireplace TV Console for TVs up to 50″, Espresso” Cancel reply

When it comes to selecting a proper product, there sure are a lot of things you have to worry about. We are here to make the experience of selecting a product a lot easier. By providing best products on market, well analyzed reviews and great discounts which you can find on our website. Hopefelly, this will help you make your selection a lot easier in order to have your dream product.

StandForTv.com is a participant in the Amazon Services LLC Associates Program, an affiliate advertising program designed to provide a means for sites to earn advertising fees by advertising and linking to Amazon.com.

Get Coupons Codes and Online Deals delivered straight to your Inbox